NeGOP Exec. Dir. tried to bully a Republican for telling the truth about racism and the GOP; now he's trying to hide from the Internet

The other day, Nebraska (motto: "We're too cheap to have a House of Representatives!") State Senator John McCollister, whose family is prominent in state GOP politics, tweeted criticism of the GOP, saying that it was "complicit in obvious racist and immoral activity." (https://twitter.com/SenMcCollister/status/1158178237899522048)
McCollister's tweets went viral via attention in HuffPost and CNN, which must have been terribly embarassing to the Nebraska GOP, so its Executive Director, Ryan Hamilton, decided to try to bully McCollister, who was probably attending GOP meetings when Ryan was in diapers. 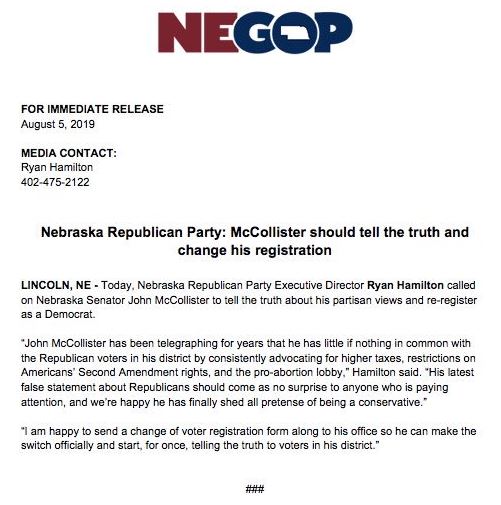 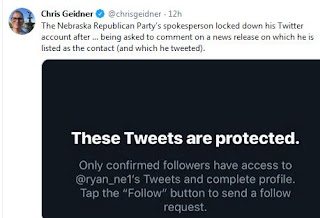 Evidently, the Internet was not amused by Hamilton's tantrum, because today his Twitter account is locked down, according to gay journalist @ChrisGeidner (We love our people!) and Hamilton also has apparently 86'd his LinkedIn account.
Sen. John McCollister's twitter account, on the other hand, is still accessible and today has TWENTY THOUSAND FOLLOWERS, up from about 640 a few days ago. This is almost four times the number of people who follow the @NEGOP, if you're keeping score. 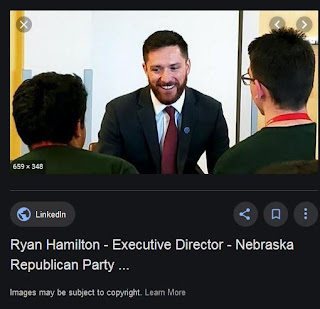 Who can say, really? But this would be a terrible time for the head of the Nebraska GOP to get busted for a history of trying to sabotage efforts to prevent assault rifle massacres, wouldn't it?
And anytime is a bad time to remind voters how extremist your party's core is, when you're trying to attract more of them to the fold.
We think Ryan Hamilton should resign or be fired, but if not, we're good.
Shoot — he might turn out to be that loose cannon gift that keeps on giving. 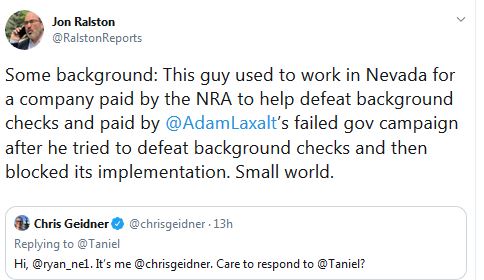