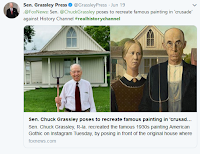 Self-styled art critic Grassley (who is much better at personally slopping at the trough of government subsidies to gentlemen farmers) wants everyone to remember that Grant Wood is from Iowa and no one to know Grant Wood was gay. Grassley, after posing in front of the house Wood made internationally famous, told Fox News this:

"I think it brings attention to the artist number one, Iowans are proud of him. He’s made a big impact on agriculture... It also reminds people of one of the outstanding examples of his paintings is the husband and wife in front of this home, and it’s a tourist stop as well."

Here's what the Smithsonian said:


Discussion by David C. Ward, co-curator of "Hide/Seek" and Historian at the National Portrait Gallery:
After a tumultuous three decades during which America looked outward, Americans began to look inward in the 1930s, emphasizing traditional virtues instead of cosmopolitan modernism.
Grant Wood, painter of the iconic "American Gothic" (1930), became the best example of this school of home-grown realism. Wood had had a difficult time as an art student in France, and he returned to his native Iowa in 1926 with relief.
But it would be a mistake to see his working in an American style as a retreat from modernism. Instead, he took traditional subjects and updated them with an understanding of psychological complexities; he was a notable satirist of American pieties, and his landscapes are so stylized that they become abstractions.
In "Arnold Comes of Age," the wistful youth set against the homoerotic scene in the background suggests the tension and difficulties faced by gay men, such as Wood himself, who stayed in Middle America.


Below is the video the Smithsonian made, using a Wood painting in the Sheldon Art Museum in Lincoln, Nebraska. (H/T: @AustinFrerick)