NetNebraska interviewed Ashley Swartz about growing transgender on a farm near Malmo. Swartz was part of a speaking tour recently to increase transgender awareness among rural Nebraskans about the challenges their transgender neighbors face. (LGBT challenges might be lessened somewhat with different Nebraska representation in Washington, D.C.)
From NetNebraska's story:


Ashley Swartz: I grow corn and soy beans. I work with my brother. My dad is retired. He gets out almost every day. He's the one that started the farm.
Bill Kelly, NET News: How long has the family farm been here?
Swartz: My great great-grandfather moved to this country, moved over by Linwood, Nebraska and started farming. His kids, they ended up two miles down the road, which (was) my great-grandfather, my dad's grandpa. 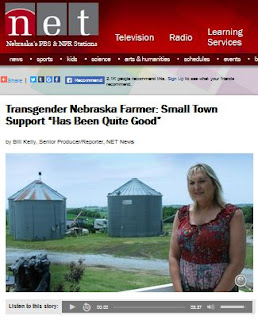 Kelly: There are people who are born into farming and there are people who are born farmers. Are you a born farmer? Do you really have that connection with the land?
Swartz: If I'd been honest with myself when I was younger, I probably wouldn't have started farming, but I've come to enjoy it and I like it a lot. It's been good to me. I stayed on the farm for my kids. I didn't know if I could get a job or if I did get a job if I could keep it if they found out about my past.
Kelly: When did you recognize that there was this division within you with what you were projecting as a boy versus what you felt inside?
Swartz: Well my first recollection was when I was three. I remember we were playing house and they needed a husband, and the father figure because we were playing getting married. And of course I played that role because that was what I was supposed to do. But, deep inside I related to being the other. I related to being the wife and the mom and other women. Didn't want to admit it. (I didn’t want to be) made fun of so I watched the boys very carefully and I learned to become that. In a lot of ways, I must have been okay because I became part of the group (but) I never really understood it or connected with it. I wanted to badly but it just wasn't to be.
I remember one time going to a wedding when I was like seven years old. And, everybody coming up to me, "Oh, you're so handsome in your cute little suit." And, I remember feeling like, "Well why aren't I pretty?" And, then I'd beat myself up for thinking that. I'd go, it means the same thing as a compliment but it doesn't mean the same thing. One was more masculine and one was more feminine. One matched me and the other did not.