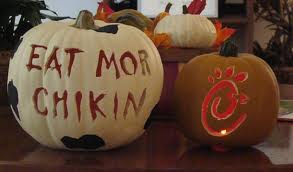 On Nov. 1 at 6 am, two new Omaha-area standalone Chick-fil-A restaurants (there are now two limited-service locations in the Mutual of Omaha Dome and Mutual Bank) will open, in Papillion at 8710 S. 71st Plaza, operated by Kyle Schisler and in Bellevue at 2016 Cornhusker Road, operated by Tom Deall. The first 100 heterosexual supremacists customers in line will get free Chick-fil-A for a year (52 free meal cards). If there are more than 100 in line, a raffle will be held.
Both locations will have "fall festival-themed" (Oh look! Christers want to redefine Halloween!) activities for overnight campers, including games, music, prizes for costumes and tent-to-tent trick-or-treating.
Privately-held Chick-fil-A hasn't released 2012 sales figures yet, but consumer use of the chain was up 2.2 percent in the third quarter compared with the same period in 2011, according to a Sandelman & Associates survey of more than 30,000 fast-food consumers conducted in markets where Chick-fil-A is located.
Market share was up 0.6 percent, and total ad awareness was up 6.5 percent.
Posted by Enzo