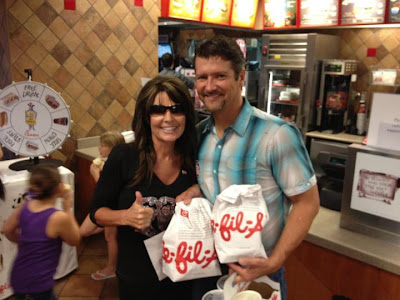 The caption on this picture from Palin's blog?
"Stopped by Chick-fil-A in The Wood­lands to support a great business."
Meanwhile, Chick-fil-A, which is becoming increasingly radioactive, is replacing its Muppets promotion (after being dumped by the company) with a Berenstein Bears tie-in. The Berenstein family says it was unaware of "any" Chick-fil-A controversy until July 25th, that the promotion has been in the works for a year and that it now has no control over the merchandising blitz.

We hope those concerned about this issue will direct their comments toward HarperCollins and Chick-Fil-A.

AKSARBENT has no doubt the Berenstein family is sincere in its hope that disgusted parents will yell at Chick-fil-A and HarperCollins and not them as it would no doubt distract from counting the money they will receive from their association with Chick-fil-A.
One last thing: HarperCollins is owned by Rupert Murdoch's News Corporation, parent of Fox News.

Email ThisBlogThis!Share to TwitterShare to FacebookShare to Pinterest
Labels: Chick-fil-A