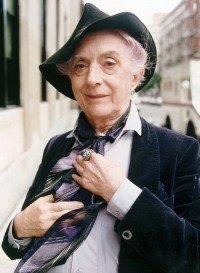 Jim Burroway of Box Turtle Bulletin, notes that early on, Quisp decided that his life’s work would be “making the existence of homosexuality abundantly clear to the world’s aborigines.” Crisp's stronger attraction to camp remarks than to common sense got him into trouble during the early years of the AIDS crisis, when he recklessly quipped that AIDS was a “fad.”

He made a pact with a New York performance artist named Penny Arcade that he would live to be a hundred years old, with a decade off for good behavior. He died just one month before his 91st birthday.

Related: AKSARBENT had Midnight Mass at the Vatican running in the background last night. We appreciated the color commentary which informed us that St. Peter's Basilica occupies five acres and that Pope Ratzi has to cover the length of two football fields just to get to the altar. (This is why they push him in a cart.) We looked up in time to see shots of a nativity scene of Christ in a rude manger/hut, followed by a vertigo/acrophobia-inducing shot of the wildly ornate gold leaf on the Vatican ceiling. Probably not a good juxtaposition, but then it wouldn't be the first example of the Catholic Church's tone deafness, would it?
_________________
*Frequently inconsistent and even contradictory biblical accounts are in accord on one thing: descriptions of shepherds in the fields indicate that Christ, if he existed at all, was probably born in the spring and certainly no later than early fall.
Christers did not commemorate the birth of their savior for centuries; when they did, it was almost certainly a ruse to poach on the winter solstice festivals of pagans in order to win converts, hence the real "reason for the season."
Posted by Enzo