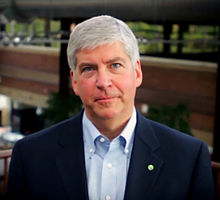 HB4770, which prohibits public employers from providing partner benefits to unmarried partners of public employees, was signed into law Thursday by Michigan's GOP governor Rick Snyder, according to Todd Heywood of Michigan's PrideSource.


Emily Dievendorf, policy director at Equality Michigan, also slammed the governor for the signing.
"Gov. Snyder's support for these bills is appalling. Today, the Governor told unmarried public employees that they could no longer care for their partners or children. He has put hardworking gay and lesbian couples and their children into harm's way by eliminating important health care coverage. He has spent the last two years talking about creating a welcoming state with a attractive business climate, and these bills fly in the face of those goals," said Dievendorf. "All families in our state, including gay and lesbian families, should have fair access to health care coverage. Governor Snyder caved to the radical social agenda coming from the legislature. He has rejected our shared commitment to economic growth. In order to compete in today's global business environment, we must build a culture that prioritizes fundamental fairness. This law will only serve to hurt Michigan."
Democratic State Sen. Steve Bieda (D-Warren) said he was disappointed the governor had signed the bill.
"If there is any question this governor is a moderate, that has just gone out the door," said Bieda. "We want to attract the best and brightest into the state. I think it sends a message about what kind of state we are to the rest of the country. I think it is particularly cruel happening two days before the holidays. It is going to be traumatic and extraordinarily disruptive to a number of families across the state. I had hoped the governor's better nature would have prevailed, but evidently not."

HB4770 was approved by the Michigan House 64-44 on September 15, 2011. You can see a video of Jim Townsend articulating his disgust with the bill before voting against it, here. The following representatives voted to cut off insurance to gay spouses (Source: MyGov365):

Email ThisBlogThis!Share to TwitterShare to FacebookShare to Pinterest
Labels: ADF