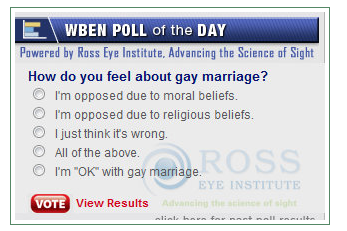 WBEN, the right-wing Buffalo, New York, radio station, is running a biased "poll" about same sex marriage. Not only is the wording of the poll outrageously slanted, there is evidence that the station may have tampered with the results.
Alan Bedenko took screencaps from WBEN's web site: at 10:36 the station's poll results showed 425 votes against gay marriage and 868 votes by people who were OK with gay marriage. Four minutes later both results had dropped; the antis to 367 and the pros to 281.
(Via Joe.My.God; see blog list, lower right)
Posted by Enzo